The Solaris volume manager, SVM, comes with the latest version of Solaris,
Solaris OE 9. This is know as Solstice DiskSuite[tm] from previous versions of
Solaris. Several new features are present: soft partitions, monitoring active
disks, access via SMC. I will provide a simple guide how you can create a RAID 0
concatenation or stripe, a RAID 1 configuration mirroring the root, var and swap
slices and maybe a RAID 5 in the near future. Please let me know if you find
mistakes or if you have any comments

I will describe how you can create four mount points, /u01 /u02 /u03 and /u04
for Oracle software. This is a basic exercise and should be avoided when are you
planning to setup a real database environment. Concatenation does not offer a
very good I/O performance and better choose a stripe model.

We will use a simple RAID 0 concatenation between two IDE disks (c2t0d0 and
c2t1d0) to do this. As you might see these disks are on the same IDE channel.
Consider using them as separeate channels. On the first disk it is space left
for the last slice, 7th, which will hold four different soft partitions, d1-d4.
On the second disk, c2t1d0, four slices will be created as c2t1d0s0, c2t1d0s1,
c2t1d0s3, c2t1d0s4 where all these will concatenate with the first four soft
partitions from disk one, c2t0d0, in order to create the OFA mount points /u01 –
/u04. Let’s start !

For this example we will use two IDE disks, c2t0d0
and c2t1d0. I think many people can get two cheap IDE disks and play around
under Solaris. The first disk has already six slices defined and I will create
the last slice, the 7th one. 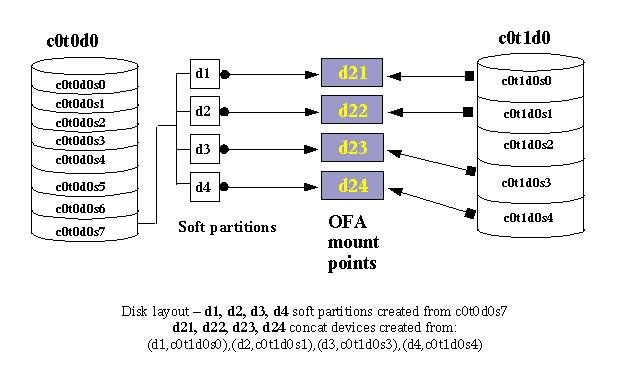 We will create a basic stripe between two IDE disks, c2t0d0 and c0t2d0. We
will stripe two slices together to create a mount point, which it will be used
to install some software later on. You can create a stripe using as many
possible slice you like if you have disks.

When you define a stripe create equal size slices ! Previously under
concatenation example you can use different sizes of slices as you like.
Remember than under Solaris SPARC you can have max to 7 slices per disk. Using
Volume manager now you can define soft partitions which extend this limitation.
So if we have the following layout of the disk:

As you can see the slice 0 holds the root, slice 1 represents the swap used
under this system and the slice 3 is the var to hold the logs. The 4th slice had
been defined as a dedicated crash dump device. The 7th slice holds the Volume
Manager state replicas. So the 5th slice has space, around 24.41GB free and it
is the only one available under this configuration. We are planning to define
four more slices like /u01 /u02 /u03 and /u04 but we can’t because we have only
two available slices: 5th and 6th. For this we will make use of soft partitions.
We will take the 5th slice and break it into four distinct soft partitions.

For mirroring purpose we would need to have 2 identical hard disks, SCSI,
SATA or PATA. For a cheap solution you could buy 2 SATA disks for less than 150
euros. I prefer Seagate disks. I will describe all these examples under Ultra 10
workstation. We will plan to mirror root, swap and var slices.

First there are couple of things to make sure they are done in order to get a
mirroring solution under Solaris:

This site uses Akismet to reduce spam. Learn how your comment data is processed.