Multipathing iSCSI devices can be implemented at different levels in the Solaris storage protocol stack.

Note – The iSCSI Multiple Connections per Session (MC/S) is currently not supported in Solaris but might be available in a future release.

iSCSI is built on the Solaris IP Stack, which includes:

• At a higher level (that is independent of the transport layer), Solaris provides multipathing software

(MPxIO). Because MPxIO is independent of transport, it can multipath a target that is visible on both iSCSI and FC ports.

Because of their location in the network protocol stack, each multipath solution is useful for different purposes.

IP Multipath (IPMP) is a native Solaris system facility for network multipathing. Operating at the IP layer in the networking stack, IPMP provides for fail-over and aggregation over two or more NICs. For more information about IPMP, see the Solaris 10 System Administration Guide: IP Services, at http://docs.sun.com/app/docs/doc/816-4554.

To implement IPMP, a system administrator selects NICs that are on the same subnet and places them in logical IPMP groups. A daemon (part of the IPMP system) monitors the health of the ports and can be configured to monitor connections to specific iSCSI targets. In the event of a port failure, the other port on the same subnet assumes the same Media Access Control (MAC) address as the failed NIC, and the iSCSI connection continues uninterrupted.

The following figure shows a sample configuration for IPMP. 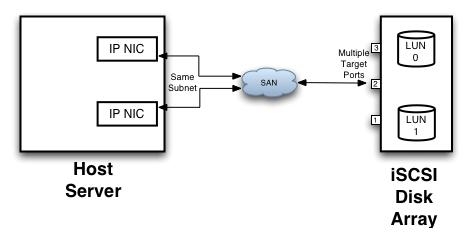 IPMP participates in dynamic reconfiguration (DR). On systems that support DR, administrators can replace NICs without disrupting networking traffic. When a NIC is replaced, it is added back to the IPMP group and used thereafter for I/O.

In TCP/IP, connections describe communication between two portals. A session is the association between an initiator and target, either of which may have one or more portals. Multiple Connections per Session (MC/S) allows initiator portals to communicate with target portals in an coordinated manner. Target portal and initiator portal redundancy are both supported. Link aggregation is also supported. The following figure shows one configuration that supports MC/S. 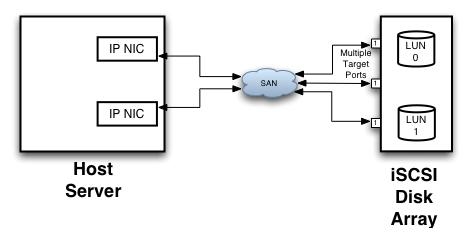 MC/S also allows (but does not require) more sophisticated error handling than simply retrying a command. This error recovery allows commands from a failed connection to be recovered quickly by other good connections in the same session. The SCSI layer is not aware of the error.

In general, iSCSI vendors do not yet support MC/S. Therefore, MC/S is not supported in the Solaris 10 release, Update 1, of the Solaris software initiator, but it might be supported in a future release.

MPxIO is a Solaris component that supports multiple physical paths to storage. MPxIO is the current Solaris functionality that supports multiple physical FC connections. Because MPxIO operates above the transport layer (at the SCSI protocol layer), it can support FC, InfiniBand (IB), and iSCSI in certain configurations. For more information about MPxIO, see http://www.sun.com/products-n-solutions/hardware/docs/Software/Storage_Software/Sun_StorEdge_Traffic_Manager/.

FC and iSCSI drivers register logical units (LUNs) with MPxIO. MPxIO matches paths to the same logical unit at the SCSI protocol layer by querying the unique SCSI per LUN identifier from each device. MPxIO collapses duplicate paths to one device so that the target driver and layers above know only of the one device.

These two parts are concatenated, as shown in the following example target port identifier.

The iSCSI initiator registers an instance with MPxIO for each LUN for every unique target port identifier.

MPxIO might seem to be the ideal solution to the current lack of native iSCSI multipathing support in the Solaris initiator. However, in order for MPxIO to support an iSCSI target, the target must support configuring different SCSI target port identifiers for each portal. One method of doing this, as shown in the following figure, is to allocate portals into multiple target portal groups so that the TPGT makes the target port identifier unique. 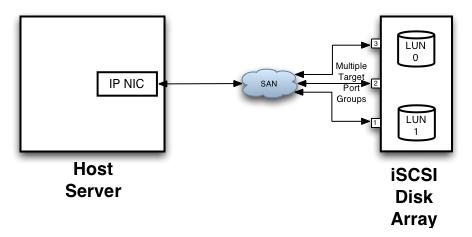 Another method is to simply have different iSCSI target names per portal. To create unique names, array vendors can choose either of these approaches.

The target’s port configuration determines whether MC/S or MPxIO can be used for multipathing.

• If an iSCSI target supports MC/S, it will present all of its target portals in a single target portal group.

With such a target, all target portals form one logical SCSI target port, and the Solaris iSCSI driver therefore registers only one instance of a LUN with MPxIO.

MPxIO can also be used when there are dual iSCSI to FC bridges to a FibreChannel SAN, as shown in the following figure. 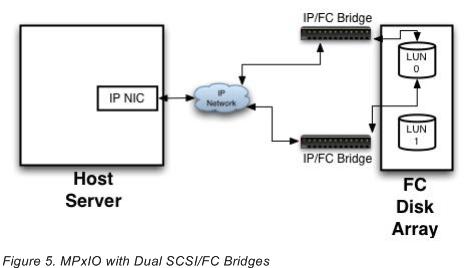 As in the previous example, each LUN has a different target identifier because the iSCSI specification requires unique names for different devices. iSCSI presents both instances to MPxIO, and then MPxIO matches the unique SCSI per LUN identifier, finds that they are identical, and presents one target to the target driver.

MPxIO with Different Transports to the Same Device

Because MPxIO is above the transport layer, MPxIO can support different transports to the same device. In the example configuration shown in the following figure, one LUN appears to the host via FC and iSCSI paths. In this configuration, MPxIO will utilize both paths. 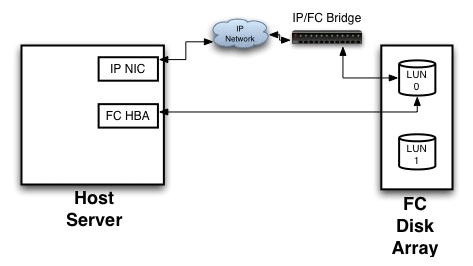 LUN0 at the disk array appears both to the IP NIC and FC HBA in the host. MPxIO will consolidate the two paths into one and then present it to the target drivers. This is how bridges currently work today. Arrays that support both FC and iSCSI connections natively can use the same mechanism.

Note that, in this configuration, MPxIO performs its default load balancing. For a symmetric access device, this is generally round robin load balancing, so that I/O requests alternate between active links. This is independent of the performance of relative links. Because load balancing is round robin, MPxIO is most useful in configurations in which all links between initiator and target have equal bandwidth and latency.

Set up a mail client:

Note: The account needs to be reset if when trying to log in the following message is received:

3004-303 There have been too many unsuccessful login attempts; please see
the system administrator.

Because you must have at least two metadb replicas available for the
system to work, I suggect that your chosen slice have two metadb
replicas in it, on each drive. That way you have four metadbs in total
and you can lose either drive and keep running.

su to root and set up your path for sanity …

Check your /etc/system file and you will see some new stuff at the
bottom :

At this point, if you want, you can reboot. You will see a stack of
WARNING messages, not errors, WARNINGS only ( hand waving again ) about
a stack of failures due to raid this and trans that not loading. Ignore
this. Everyone has fits when they see it thinking it means some
catastrophe has happened to their system. Not yet. :) If you use
metadb -i you should see

2. Identify which subdisk each volume is on that you want to tie back to the hard partition

1. remove any volumes from the disks
a. vxassist –g disk-group remove volume volume-name
b. repeat the above procedure for each volume on the disk

2. remove disks from the disk group
a. vxdg –g disk-group rmdisk vxvm-disk-name
b. repeat the above procedure until there is one disk remaining in the disk group; you cannot remove the last disk from a disk group. At this point you will just need to remove the disk group itself.

Identify which plex you wish to remove using vxprint